Every year, many students from Portuguese-speaking countries choose to study law at the University of Macau (UM). The Faculty of Law (FLL) at UM has a strong faculty team comprised of high-calibre scholars from Macao, mainland China, Portugal, and other countries. The faculty regularly invites world-renowned scholars in the field to serve as visiting professors, and hires incumbent judges, prosecutors, as well as legal experts and attorneys working in the government to teach on a part-time basis, in order to produce legal professionals with a global mindset and competitiveness.

Similarities to Law Programmes in Portugal

Kennedy Antonio from the Republic of São Tomé and Príncipe is a second-year law major at UM. There are two main reasons why he chose to study law at UM. First, because of Macao’s unique historical background and its rapid development in various areas, there is an openness about its legal system that befits an international metropolis. Second, a more important reason, the law programmes at UM are taught in Portuguese, which is a big draw for students from Portuguese-speaking countries. The law programmes at UM largely follow the Romano-Germanic system or the Continental European system. Antonio says, ‘I made up my mind to study law at a young age because I wanted to understand the relationship between individuals and the relationship between states and their citizens in terms of rights and obligations. UM has strict requirements for law students. It requires the students to thoroughly understand the legal theories and principles, which helps to deepen my understanding of the different laws in our society.’

The bachelor of law programmes at UM cover important issues in law, such as the current trends in law and the evolution of legal theories. The bachelor of law in Chinese and Portuguese programme includes courses in European Union Law, International Law, and Comparative Law. Antonio believes the knowledge in these fields will be very useful when he returns to his native country. He says, ‘UM is very flexible in law education and its law programmes meet global trends. So graduates of the programmes, whether they are from Macao or elsewhere, will have a great competitive edge and will be able to make a contribution to their countries or regions.’ He plans to stay at UM to pursue further studies until he obtains a PhD degree.

Manuel RoDirigues De Veiga, a law major from the Republic of Cabo Verde, obtained his bachelor’s degree from UM this June and decided to stay at UM for further studies. Several years ago, Veiga was admitted to UM on a scholarship for his outstanding academic performance, thus beginning a new chapter in his life. He says, ‘UM is like my second home. It has excellent faculty members and teaching facilities. Studying here is like savouring a cocktail, because you meet people from different nationalities.’ He believes the strong faculty team at UM and the university’s effort to support the government in developing Macao into a business platform between China and Portuguese-speaking countries will help him achieve his dream. He says, ‘Cape Verde has a huge demand for merchandise from China, especially electronics. Importing Chinese merchandise to Cape Verde via Macao naturally involves a lot of legal issues.’ He explains that the legal systems in Macao and Cabo Verde are both based on the Portuguese law, with close similarities in language and logic. He plans to pursue a career in e-business after graduation. Specifically, he wants to build an e-platform in Macao to facilitate business activities between China and Cabo Verde, so knowledge of business laws in both places will be a great advantage.

The Unique Advantage of Studying Law at UM

Rita Rocha from Portugal decided to study law at UM as an exchange student because she wanted to understand Macao’s special legal status in China as a special administrative region. She says, ‘The legal system in Macao is based on the Portuguese law, but the laws in the two places have both experienced changes with time. On the one hand, all the Portuguese heritage is still left in Macao’s legal system, but on the other hand Macao didn’t copy the alterations and adaptations the Portuguese have made, so it’s fascinating to study the differences between Macao’s law and the Portuguese law and how they have evolved.’ It’s been nearly 20 years since the handover of Macao’s sovereignty to China, Rocha is pleased to see Macao’s effort to become more independent in its legal system. Her sentiments are echoed by another exchange student from Portugal, Beatriz Lourenço, who points out that the differences between Macao’s law and the Portuguese law are largely attributable to the differences in religions and cultures.

Lourenço says, ‘The fact that the laws in Macao are written in Portuguese is itself a great advantage. Take Macao’s neighboring city Hong Kong. The laws in Hong Kong are written in English, which makes business people from around the world more confident to do business in Hong Kong because they can understand the laws in English. Likewise, Portuguese being the official language of law in Macao accords the city the role of a gateway to China for people from Portuguese-speaking countries. Also, because of Macao’s proximity to China, studying in Macao allows me to access information about China that I couldn’t access in Portugal, so I can have a deeper understanding of China’s current development.’ Lourenço plans to find a job in Macao after graduation. That’s why she decided to study law at UM. She wants to familiarise herself with Macao laws and build networks in order to pave the way for her future career development.

Francisca and Teresa are two other exchange students from Portugal in the FLL. They both treasure the opportunity to study at an Asian university, so they want to make the most out of it. They have enrolled for a Chinese language course in the Confucius Institute at UM which is targeted at people whose native tongue is not Chinese. Teresa says, ‘I love to learn new languages and new cultures, and UM is the ideal place to learn Chinese, because when you live in a Chinese-speaking environment, it’s easier to remember the new words. My Chinese language instructor is very strict. He believes in the importance of speaking Chinese with the correct pronunciations and intonation, so if you can’t do it right, he will ask you to try again and again, until you get it right.’

Francisca wants to pursue a career in business law after graduation. As a European, she feels studying and living at UM offers her a window to the Chinese culture. She says college graduates who have studied in China are favoured on the European job market. She says, ‘Many Chinese companies are investing in Portugal. So many Portuguese companies want to hire people who can speak Mandarin, because proficiency in Chinese, and better yet, in the Chinese culture, is very useful during business negotiations.’ 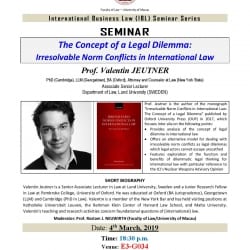 The Concept of a Legal Dilemma: Irresolvable Norm Conflicts in International...
Scroll to top