In 1990, Prof Augusto Teixeira Garcia relocated from Portugal to work on a two-year contract at the University of East Asia (UEA), the predecessor of the University of Macau (UM). At the time, he did not anticipate that this city would become his home, or that he would become an associate dean of the Faculty of Law (FLL). In the past 20 years, he has taught commercial law, in particular the Commercial Code of Macao, of which he was the main drafter. ‘All these years, I’ve never wanted to leave Macao,’ he says.

Reforming the Commercial Code in the Transitional Period

Born in Porto, Prof Garcia worked as a lawyer and professor in higher education institutions in Portugal. Despite his first impression of Macao as a ‘hot and humid place’, he later discovered that he was charmed by the city’s attractions, and he decided to stay on. In 1996, the local government appointed him the coordinator of the reform of the Commercial Code, a 19th-century creation that could no longer meet Macao’s needs.

After the signing of the Sino-Portuguese Joint Declaration on the Question of Macao in 1987, Macao was to pursue the localisation of the civil service, language (with Chinese serving as an official language) and law. ‘Legislation in Macao did not come with a Chinese translation until the late 1980s. All the laws created in the past, including the Commercial Code that came into force in 1888, had no Chinese version. So we had to translate the laws. We could either translate them as they were, or take the opportunity to reform them to provide Macao with a more modern legal environment. The government took the latter path,’ he says.

The new Commercial Code came into force shortly before the handover of Macao in 1999. At that time, Prof Garcia already had three children who were born in Macao and a close tie with the city. While some of his Portuguese friends were planning to leave Macao, he felt an obligation to stay in FLL to teach commercial law according to the new law.

Students Across the Legal Sector

On FLL’s role, Prof Garcia says, ‘The FLL is the oldest law school in Macao. Its objective is to train jurists with expertise in Macao’s legal system for all kinds of legal tasks. The programmes offered by the FLL aim to nurture legal professionals to serve the local community. The majority of the legal professionals, including judges, public prosecutors, jurists in the civil service and lawyers, are our graduates. Also, some of our graduates are current or former members of the Legislative Assembly.’

Prof Garcia has taught commercial law and company law for decades, and he fondly remembers many outstanding students. ‘One of my former students is now a judge,’ he says. ‘When she enrolled in our Bachelor of Law programme in Portuguese, she could hardly speak any Portuguese, but she did not give up and did very well later on. After getting her degree, she entered the civil service and eventually became a judge. She also did a master’s programme with me. Now she speaks Portuguese fluently. I am amazed and very proud of her because I know the difficulties she has overcome with the language.’

FLL has always cultivated special links with Portuguese-speaking countries, especially Portugal, African countries, and East-Timor. As early as the late 1990s, Prof Garcia travelled to Mozambique as part of a UM delegation to develop cooperation with Educardo Mondlane University (EMU), which he visited again this year with UM Rector Yonghua Song. This time, he explored new areas for cooperation with EMU and witnessed the signing of a memorandum of understanding between the two universities.

According to Prof Garcia, there are many students from Portuguese-speaking Africa in FLL. For instance, in the Master of Law Programme in Portuguese Language, of which Prof Garcia is the coordinator, nearly half of the students come from these countries. ‘After they [FLL students from Africa] graduate, the majority of them go back to their countries for a legal career. Some have even become ministerial-level officials in Cape Verde. Although in lesser numbers we also had students from East-Timor, some of them occupy relevant positions within the legal judiciary, the government, or the academia.’ he says.

As the Macao Special Administrative Region is approaching its 20th anniversary, Prof Garcia believes that the city will become more prosperous, and he hopes the economic prosperity can benefit residents in a more balanced manner. He says, ‘Meanwhile, UM and the FLL will continue to play an important role in Macao’s development and nurture professionals in different fields.’

In 2019, Prof Garcia (1st from right), as member of a UM delegation, visits Pedagogical University in Mozambique 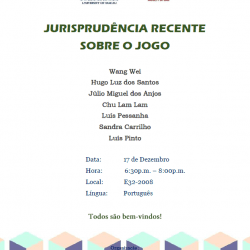