On the afternoon of May 28, Prof. Liu Jianhong, Distinguished Professor of Faculty of law, University of Macau, was invited to give a seminar for the Institute of Criminology of the Faculty of Law , University of Cambridge on the theme of “Decolonizing Criminology” through the Zoom online meeting. The topic of Prof. Liu’s speech is “ Theory of Relational Justice: Example of Asian Criminology’s Approach to Decolonizing Criminology ”.
Prof. Liu’s speech mainly elaborated the current situation of the colonization of western criminology, proposed how to build, developed non-western criminology under the background of western centric paradigm and introduced the core ideas of Prof. Liu’s “Relational Justice Theory”. Prof. Liu’s speech received an enthusiastic response. In the Q&A section, the scholars attended online asked Prof. Liu questions actively. The seminar, which originally scheduled for one hour was extended to two hours, and the meeting ended successfully! 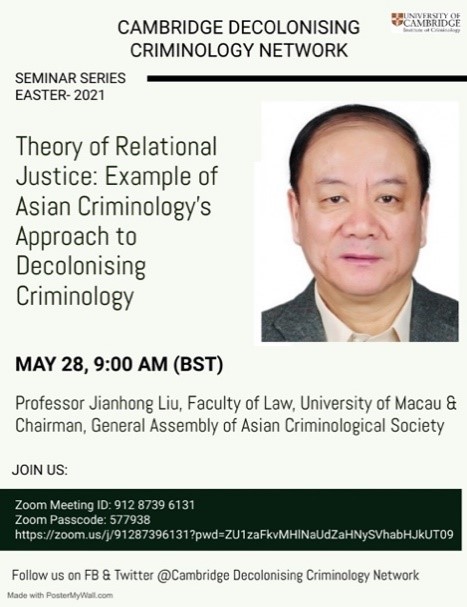