A book co-authored by Liu Jianhong, Distinguished Professor of the Faculty of Law at the University of Macau (UM), and Liang Bin, professor of sociology at Oklahoma State University, recently received the 2022 Distinguished Book Award from the Asian Criminological Society (ACS). Titled ‘Chinese Netizens’ Opinions on Death Sentences: Empirical Examination’, the book was published by the University of Michigan Press in 2021 and has attracted a lot of attention in the academia. ACS selects annually one best book from all books published on the topic of crime and justice in Asia to give this award.

China still retains the death penalty system, but little empirical evidence has been published on the public opinion on death penalty in China. Chinese Netizens’ Opinions on Death Sentences: Empirical Examination has filled this gap in the literature. Based on a content analysis of rich and thorough data, the book examines the diversity and rationales of netizens’ opinions on China’s criminal justice system, making it an excellent work for understanding public attitudes toward death penalty in a complex social environment.

Prof Liu is a Distinguished Professor at UM. He is the recipient of the American Society of Criminology International Division’s Freda Adler Distinguished Scholar Award in 2016 and the Academy of Criminal Justice Sciences’ Gerhard O.W. Mueller Award for Distinguished Contribution to International Criminal Justice in 2018. He has held various positions in different international academic organisations, including president of the Scientific Commission of the International Society for Criminology since 2014, chairman of the General Assembly of the Asian Criminological Society since 2016, and a member of the steering committee of the Campbell Collaboration’s Crime and Justice Group since 2009. He is also the founding and honorary president of Asian Criminological Society, and served in this position for the first time in 2009 and was elected again in 2013.

In addition, Prof Liu has been the editor-in-chief of the Asian Journal of Criminology since 2009 and has developed the journal into a Social Sciences Citation Index (SSCI) indexed journal. He is also editor of Springer Series on Asian Criminology and Criminal Justice Research and a member of the editorial boards of more than 20 international academic journals, including the prominent Journal of Experimental Criminology and The British Journal of Criminology, both of which are SSCI indexed journals. Prof Liu’s primary research interests include comparative criminology, comparative criminal justice, and empirical legal studies. He is a leading figure in the development of Asian criminology, with much of his research focusing on crime and justice in Asia and China. Prof Liu has more than 170 academic publications, including books, journal articles, and book chapters.

The ACS is one of the world’s most influential academic organisations in the field of criminology. Since its establishment in 2009, the ACS has been dedicated to promoting the study of criminology and criminal justice across Asia and enhancing collaboration and exchange among scholars and practitioners in the field in Asia. The ACS Distinguished Book Award is a highly prestigious award, and its recipient is selected annually from a wide range of books submitted from around the world.

For the full-version, please visit: https://www.press.umich.edu/11481664/chinese_netizens_opinions_on_death_sentences 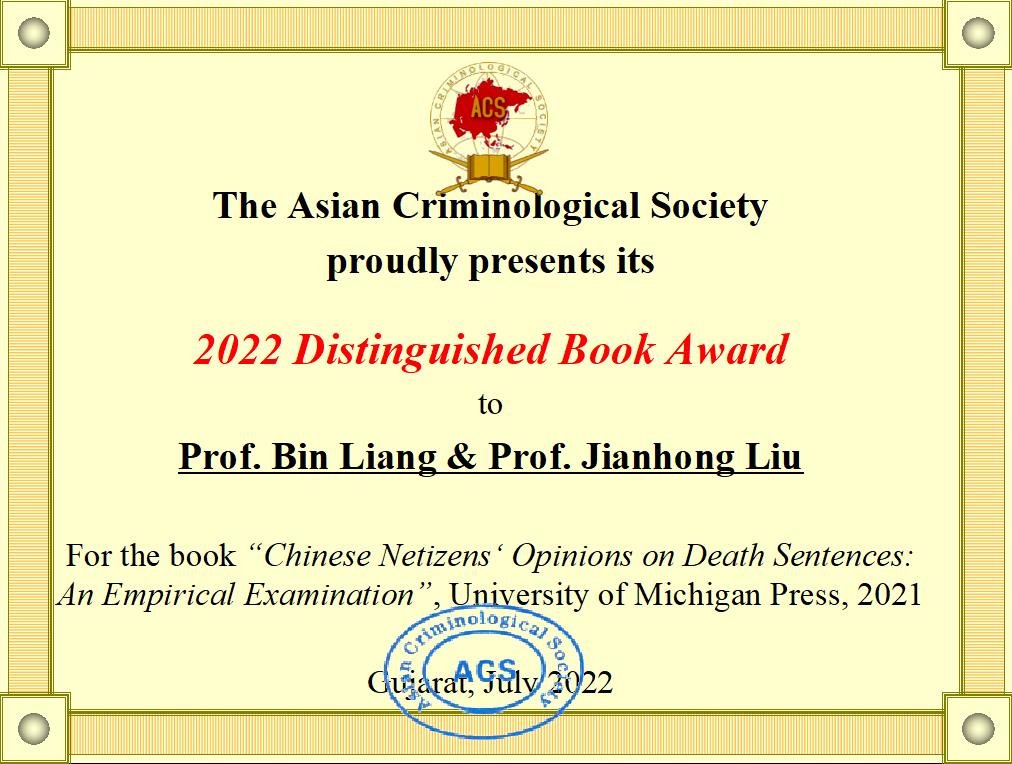